Hitler Walks Into a Bar... 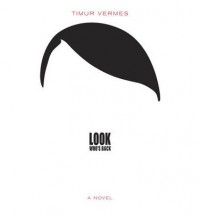 Just kidding. [spoiler] But he does wake up in an empty lot..in 2011 Berlin [/spoiler]. But Timur Vermes Look Who's Back reads like the world's longest, most hilarious scenario joke you've ever run across. Except that Timur Vermes isn't joking...[spoiler] and neither is his Hitler[/spoiler].

Time travel doesn't phase Hitler the way it phases most people. Sure, it takes him a little bit to figure out where/when he is and what's going on, but then he's--as the title announces--back [spoiler] (and taking German media by storm in a misunderstood attempt to resurrect the Nazi movement) [/spoiler]. And Timur Vermes hasn't placed the Fuhrer [spoiler] and his unwavering faith in his movement [/spoiler] in the present day for nothing.

Look Who's Back will make you laugh out loud as you follow Hitler's journey through modern-day Germanic culture [spoiler] (and try to make people understand that he's actually Adolf Hitler: easier said than done) [/spoiler]. But it will also leave you just a little worried...[spoiler] after all, at the end of the day Hitler does rather a spectacular job of convincing the German media to help him out without their even realizing the scope of what they're doing [/spoiler].

Look Who's Back is a 5 star read: hilarious, satirical, light-hearted, with a depth of cultural analysis. Worth a read, and worth taking the time to understand what Vermes is saying.

[spoiler] Because Hitler in the 21st century isn't actually a punch line: it's serious.[/spoiler]